About 75-80% of cases of non-traumatic SAH are due to rupture of a saccular aneurysm in the cerebral circulation [12].

These aneurysms are found in approximately 2-3% of the population and are more common in older people [13].

Only 2% of relatives of patients with SAH are similarly affected and an increased risk is only attributed if two or more first degree relatives are involved [14].

The genetic predisposition to form intracerebral aneurysms has been studied with links found with polycystic kidney disease [15] and, rarely, with other connective tissue diseases.

These are much more important in the causation of SAH than any genetic predisposition which is implicated in only 10% of cases [17]. 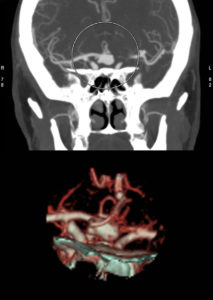 About 80-90% of aneurysms are found in the anterior carotid circulation (Fig 1) or communicating arteries of the Circle of Willis [7] and in a quarter of affected individuals these are multiple [7].

As aneurysms increase in size, wall tension rises and compliance reduces leading to an increased tendency to rupture. When an aneurysm exceeds 2 cm in diameter, it is referred to as a giant aneurysm. However, most aneurysms that rupture are <1 cm in diameter [18].

Many more people have intracerebral aneurysms than develop SAH and most ruptured aneurysms are small [12-14].

Previous Topic
Back to Lesson
Next Topic

You can find out more about which cookies we are using or switch them off in settings.

Login
Accessing this module requires a login, please enter your credentials below!
Lost Your Password?